SAL Heavy Lift, backed up by the experts of SAL Engineering, always makes an innovative and reliable logistics partner.

Imagine you were assigned to ship over 176 000 freight tons of cargo, including 12 columns weighing 900 tons each down a river with a water depth of only 1.10 metres in some areas and often severe weather conditions. Quite a challenge, right?

This task became real when Gazprom, The Linde Group, and NIPIGAS decided to realize the Gazprom Amur GPP Project – one of the largest natural gas processing plants in the world, with a capacity of up to 42 billion cubic metres of natural gas per year. The plant is part of Gazprom’s project for the supply of Russian gas to China via the “Power of Siberia” pipeline from eastern Siberian gas fields. And the only way to transport heavy-lift and oversized cargoes to the construction site is via the Amur and Zeya Rivers.

To master this unique challenge, all cargo will be loaded onto heavy lift vessels in ports in Europe and Korea before being transferred to barges on the sheltered inner anchorage of the port of De-Kastri. Special shallow draft pusher tugs, which have been specially built for this project, will push the barges up the Amur and Zeya Rivers to Svobodny for discharging at the project jetty and transfer the cargo to the last mile logistics service provider.

The cargo will be shipped in five phases from 2018 until 2022, taking advantage of the short ice-free periods on the Amur and Zeya Rivers.

THE RIGHT JOB FOR SAL ENGINEERING

Linde Group has contracted Combi Lift, a special project entity within the Harren & Partner Group, to handle the immense heavy-lift and oversized cargo logistics operations up to the project jetty. SAL will support the project on ocean shipments, where Combi Lift as project forwarding provider is handling all river transportation up to the project port of Svobodny.

This is why amongst others, SAL’s MV Regine was assigned to transport four NRU columns, weighing up to 862 tons each and measuring up to 63 metres in length, 8.5 metres in width and 7.9 metres in height, as well as two demethanizers (up to 831 tons each and measuring 87.9 × 7.4 × 7.6 metres each) in two shipments. Due to their length of almost 88 metres, both demethanizers had to be loaded and discharged over the starboard side using all three of MV Regine’s cranes. A challenge that has successfully been mastered by our experts, but needed thorough preparation beforehand.

“A lift of one unit with three cranes is something special. Contrary to single-hook or tandem-lifts, a three-crane-lift is statically indeterminate, which requires extra analyses and engineering as well as extreme care and accurate execution”, says Karsten Behrens, General Manager, SAL Engineering. “In this case we further had to discharge the demethanizer directly onto a barge, which resulted into a series of other important tasks”, he continues.

Amongst other the Engineering scope of this project included the tailor-made design of the lifting arrangement, the crane load calculation, the loading procedure development, a dynamic lifting analysis, a barge mooring analysis and the supply and analysis of the local wave climate.

“The 3-crane-lift needed accurate preparation. Next to the determination of the maximum sea conditions and wind speeds, we also carried out a calculation of the dynamic hook loads. A time-domain simulation in OrcaFlex helped us to take into account the stiffness of the cranes and rigging as well as the movement of the ship and the barge in the seaway and their relative movement”, Tilo Klappenbach, Project Engineer at SAL Engineering, reports.

“We initially planned to use a type 183 vessel for this unique lift, but had to switch to a type 176 vessel in the end”, explains Holger Krenz, Head of Project Management at SAL/Combi Lift, “Some people involved did not believe that we would be able to perform such a tight and critical lift. But it makes me very proud to see that SAL Engineering and our highly experienced crew of MV Regine proved that we are able to realize even what seems impossible at first sight.”

But this is not where SAL Engineering’s work ended. On top special time windows had to be identified and estimated within ice-free periods by using the in-house developed software WASAL. To verify that all calculated forces were not exceeded during operations, motion monitoring was applied.

“SAL Heavy Lift, backed up by the experts of SAL Engineering, always makes an innovative and reliable logistics partner for the safe and efficient sea transportation of over-sized and heavy cargo. Thanks to the whole team we successfully mastered this challenging one-of-a-kind lift“, says Christian Herold, Project Logistics Manager at Linde AG. 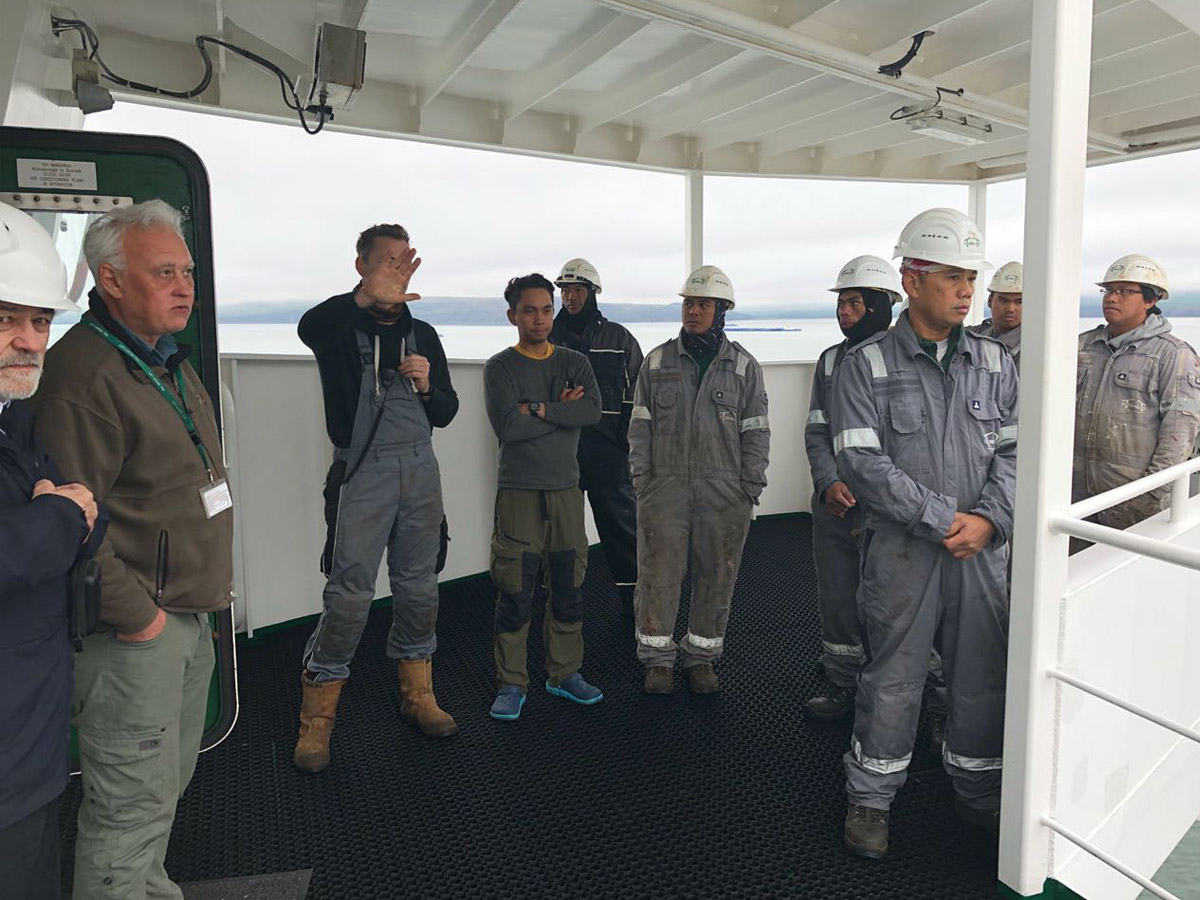 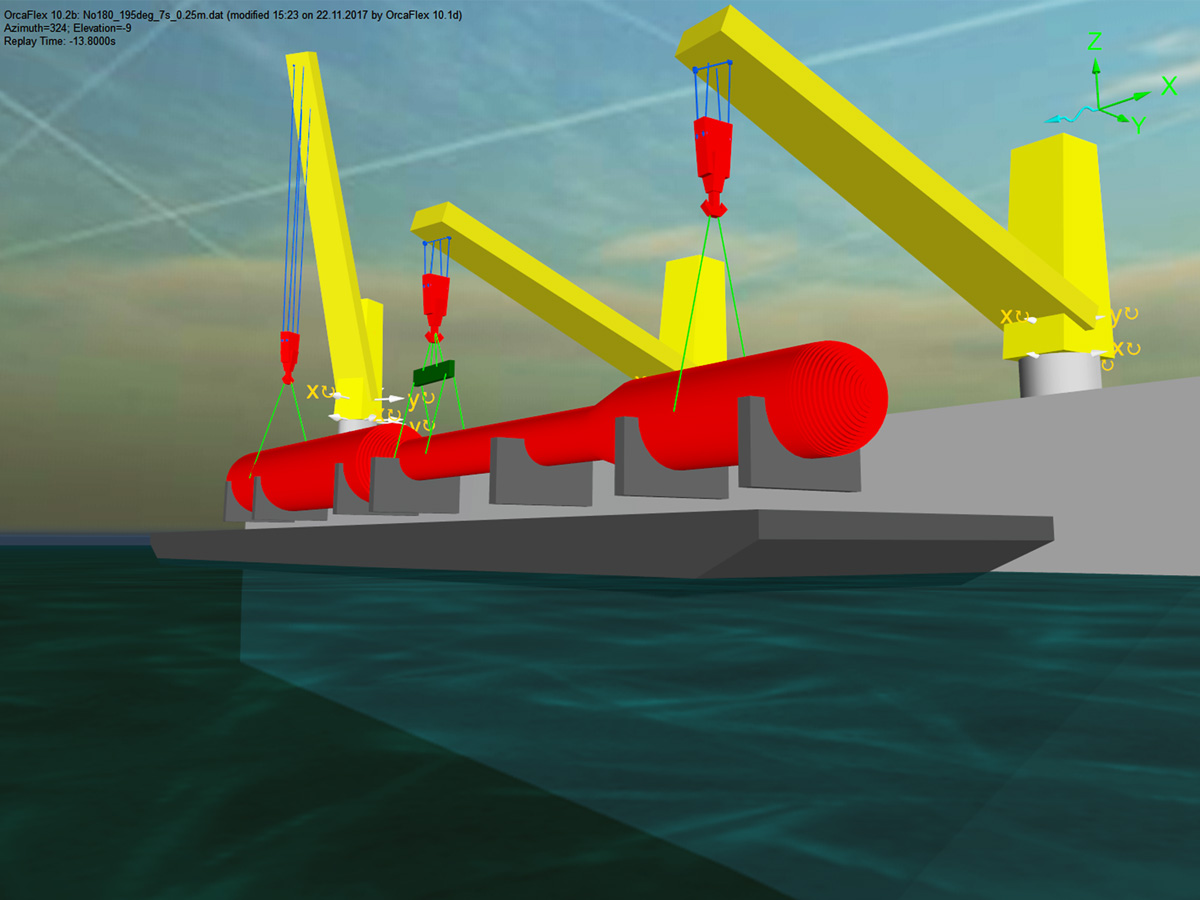 OrcaFlex simulation: Lowering cargo to the barge. The crane operation is modelled as a time-domain simulation. 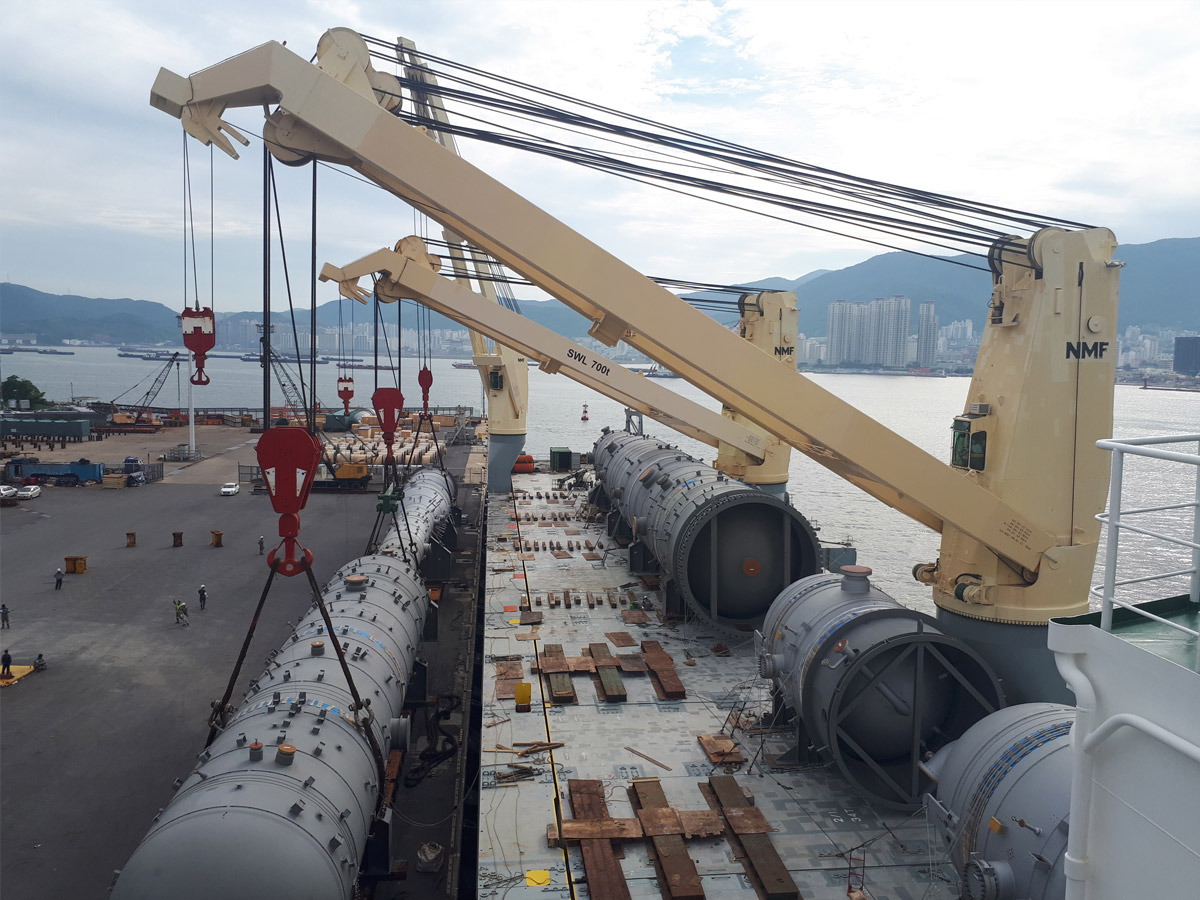 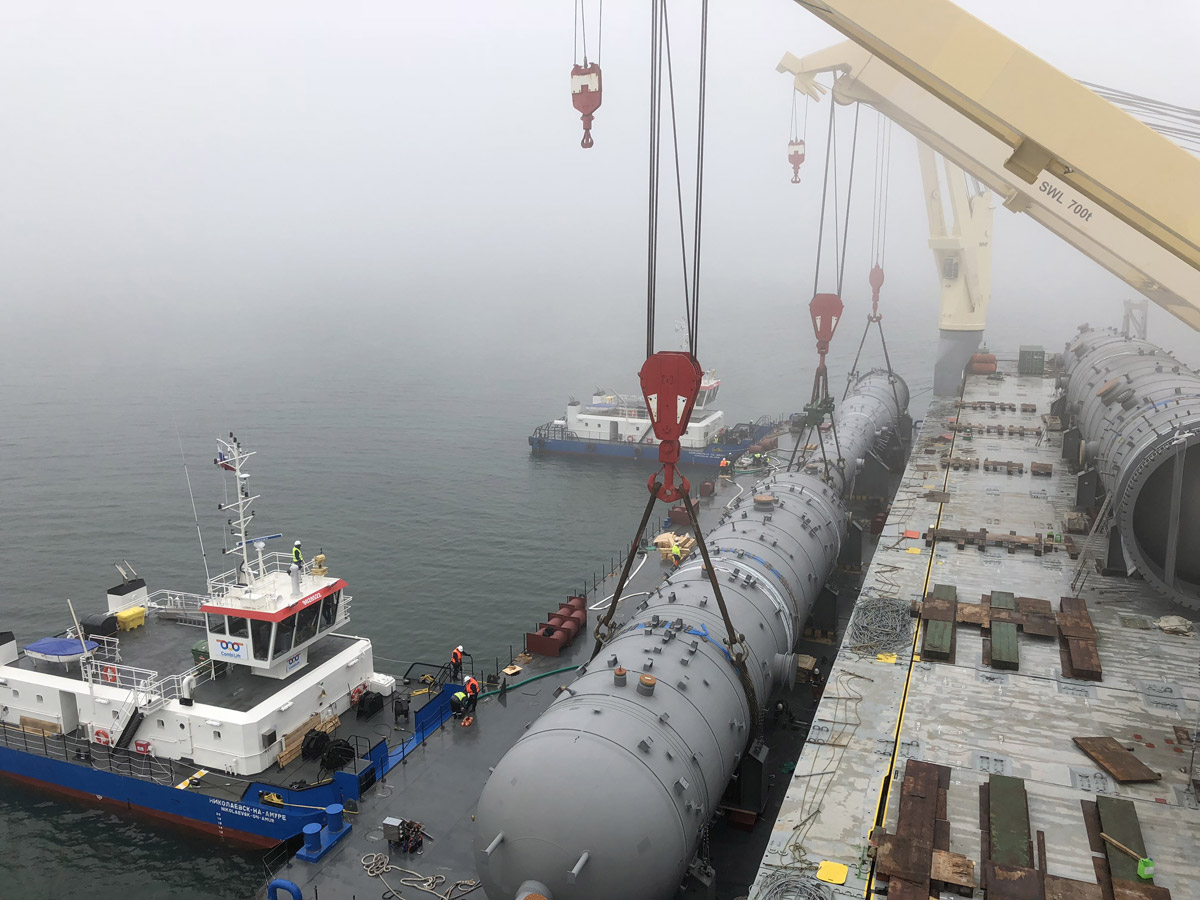 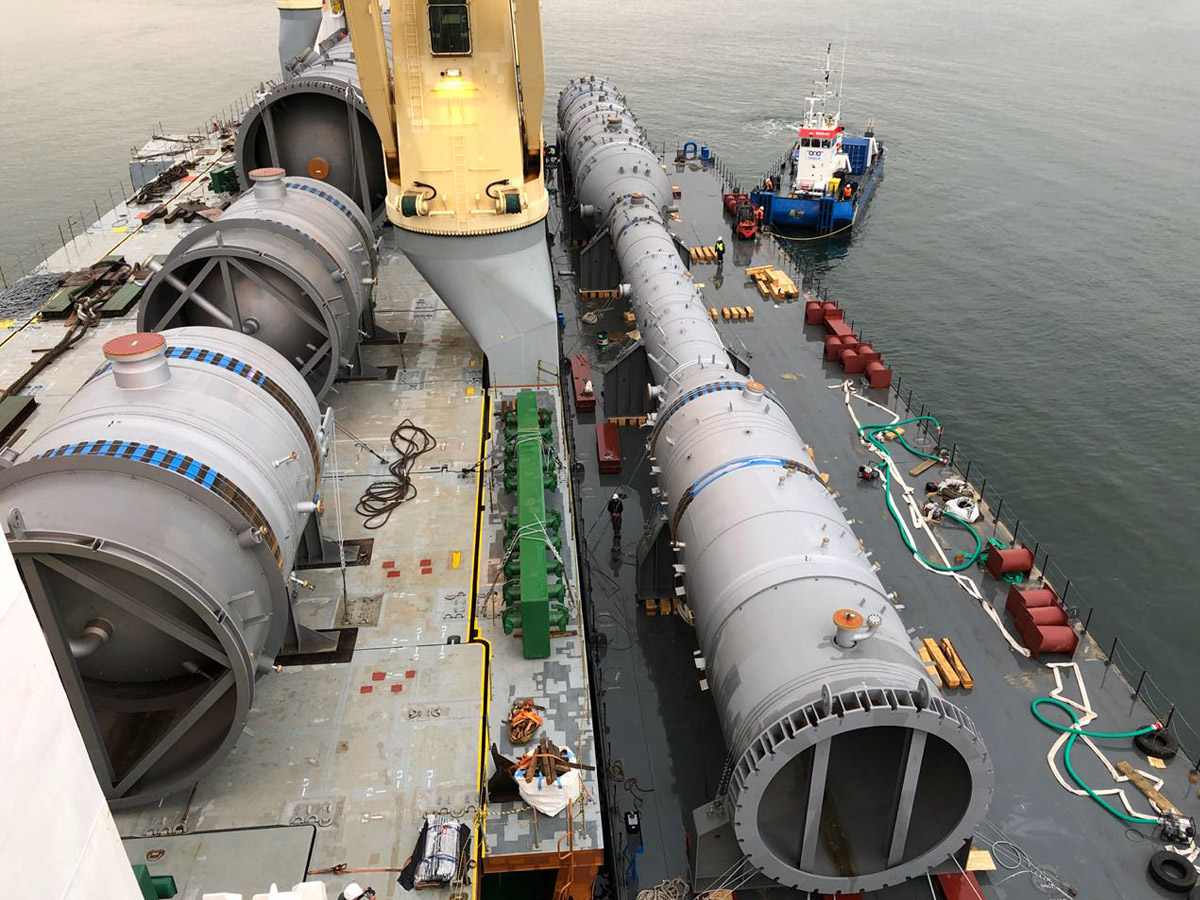 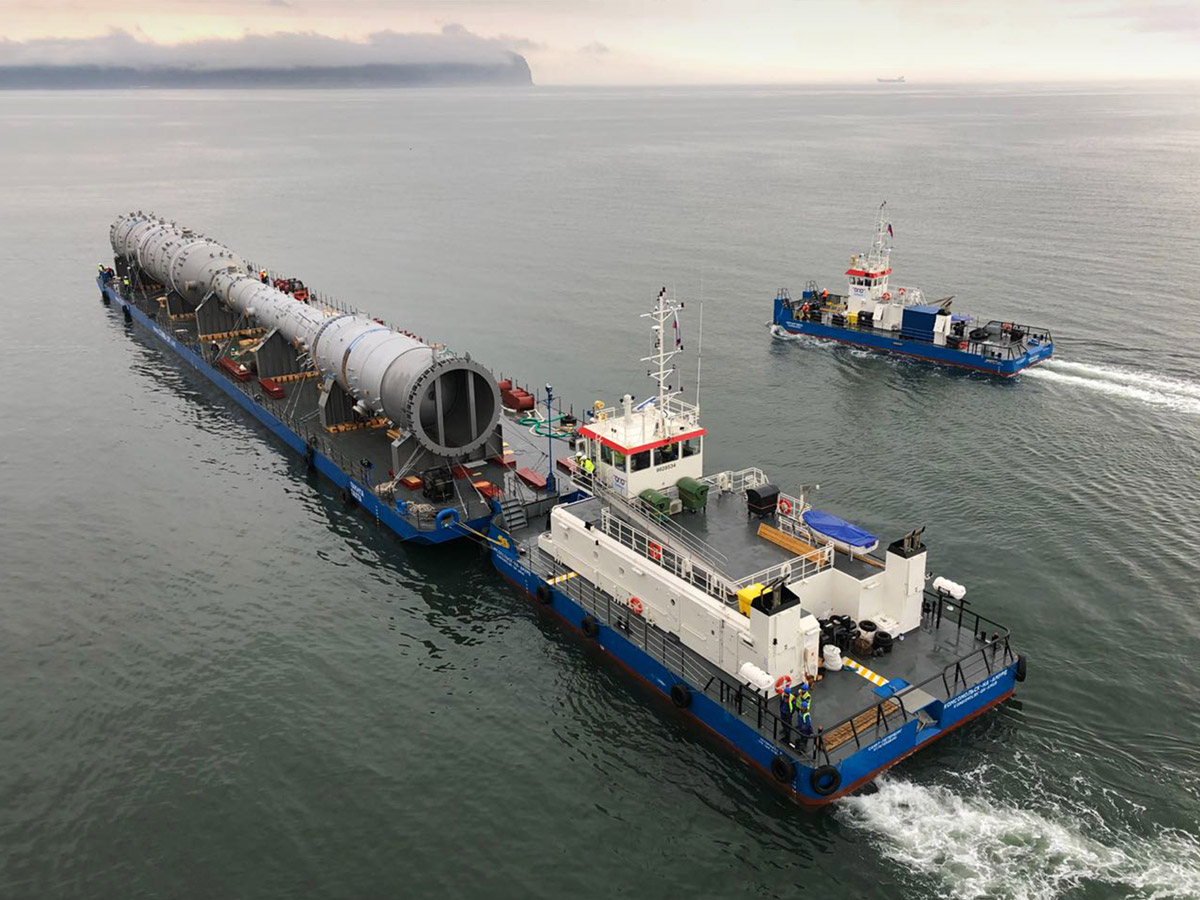 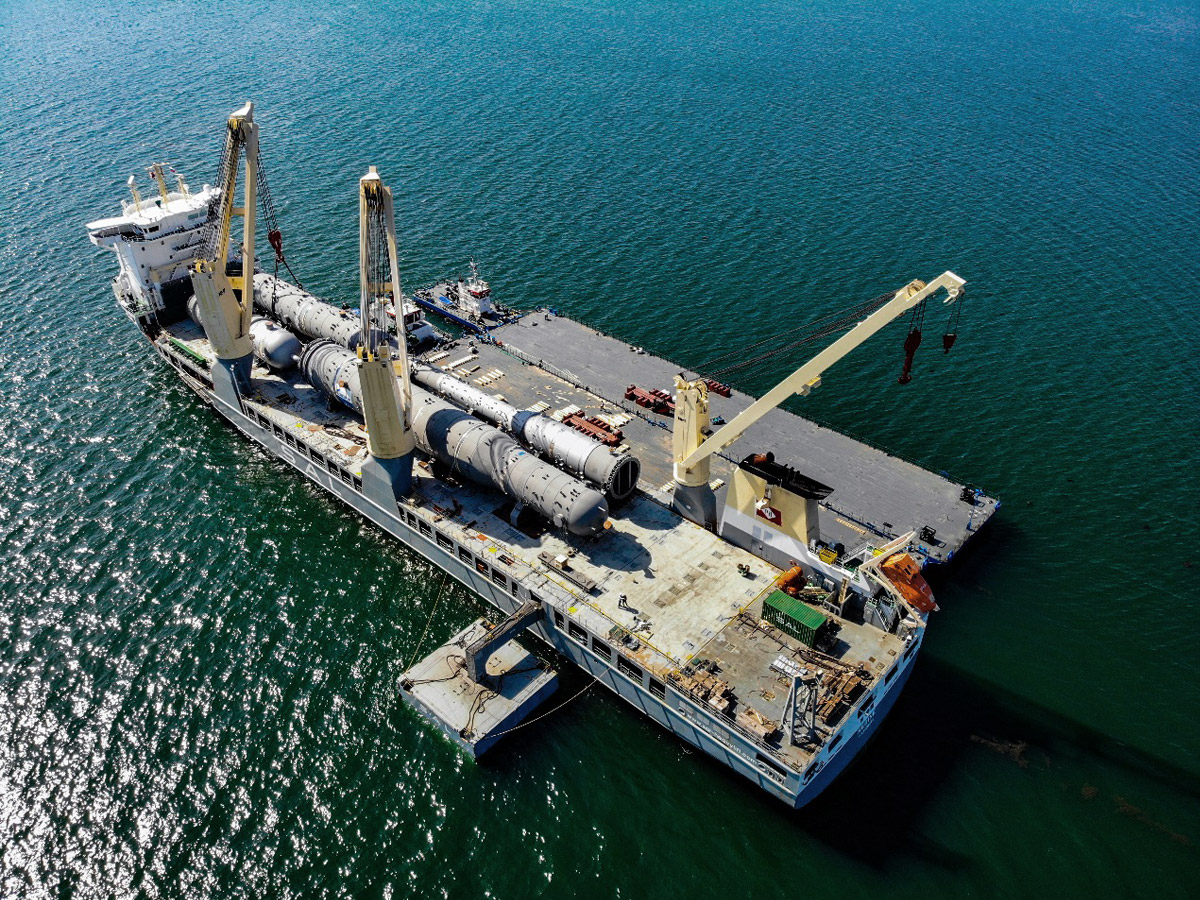 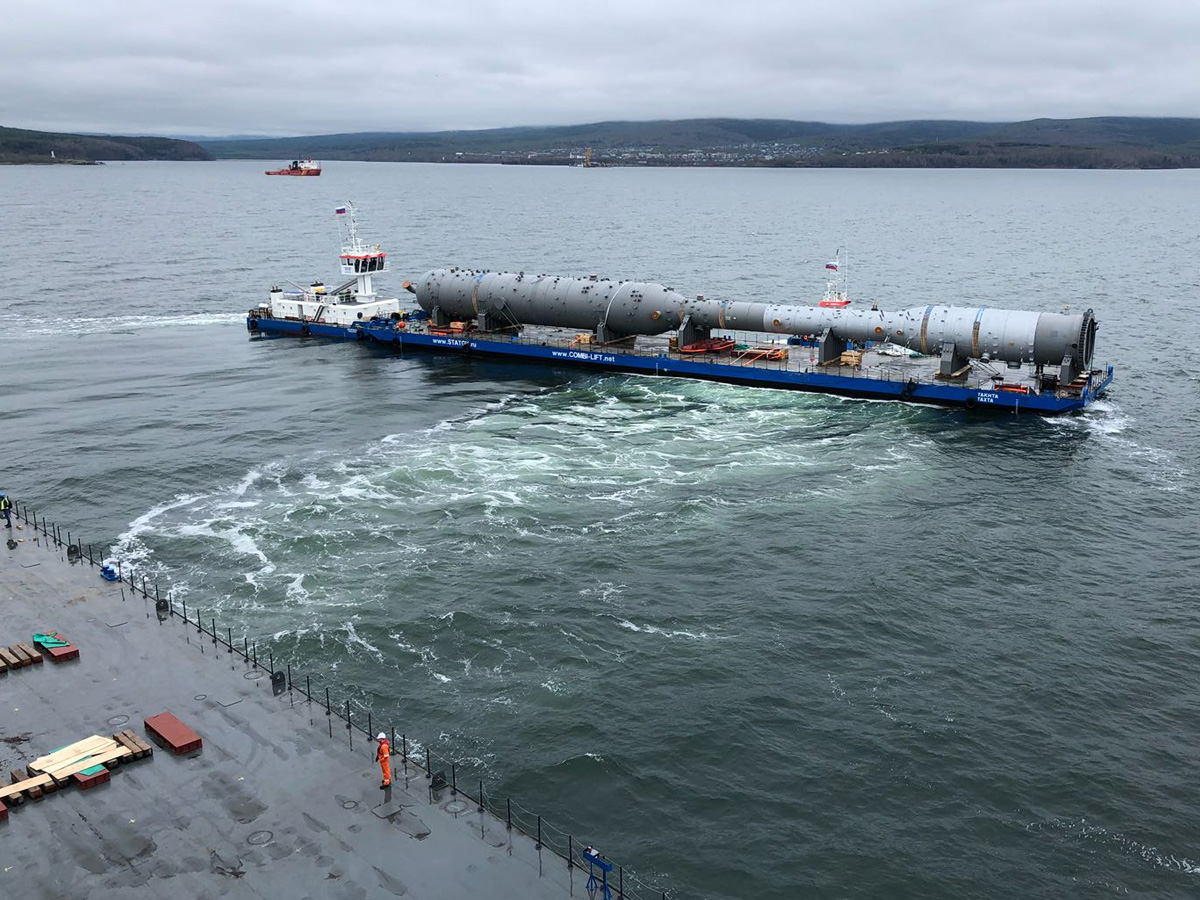 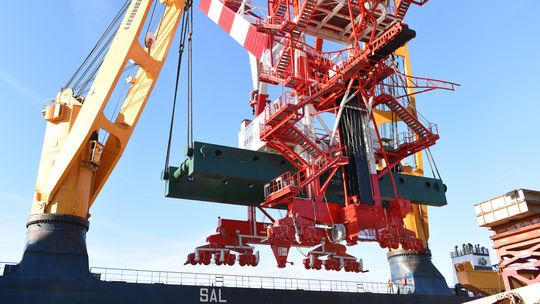 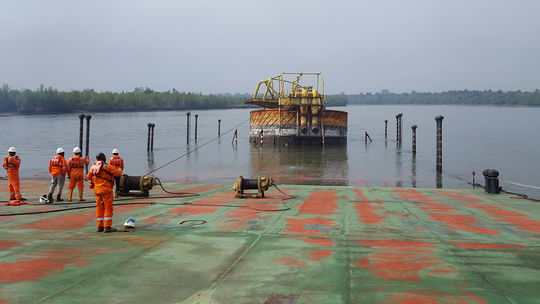 A Ballast Procedure for 15 tanks

Planning and supervision of shifting buoys into/out of water 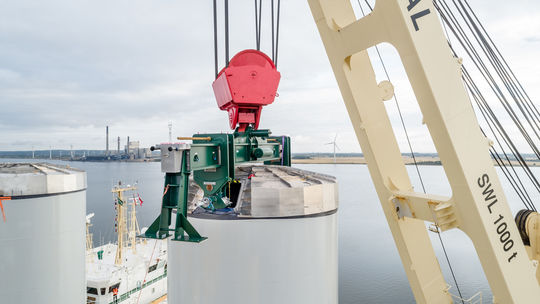